Written by
Wayne
Posted in
Uncategorized
Comments
Leave a comment 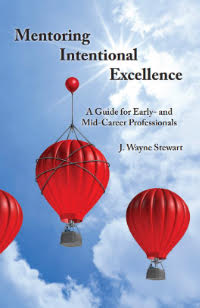 A Guide for Early- and Mid-Career Professionals

Named by Amazon #1 one new release in the Business Ethics category.

Mentoring Intentional Excellence is a book on mentoring for success, and author Wayne Stewart uses an effective format of real-life experiences to mentor the reader in lessons-learned from a 45-year career in technology and entrepreneurial ventures. Part 1 is titled The Stories, relating the experiences and resulting lessons-learned, not chronologically, but topically. Part 2 is titled The Lessons, describing instructively a lifetime of management success factors. Throughout, Stewart inserts pithy and interesting sidebars, some of which are included below.

“One of the toughest octopi in the business world is organizational conflict.”

In Part 1, The Stories, Stewart mentors the reader one-on-one to help him/her through a lifetime of key decisions that collectively define the success (or failure) of a career. Stewart begins with a chapter entitled Intentional Beginnings, and then moves through chapters such as Battling the Octopus, Dancing With Your People, Negotiating As An Artform, Dealing With Big Personalities, and Intentional Quality. The meaty stories deal with the major questions that professionals, managers, and executives are confronted with, describing his own ethical, leadership, and human relations challenges and responses. Some are humorous, some painful, and some are even tragic and deadly. He describes the intentional decisions that every person must make that determine their behavior and character. He argues that those decisions should never be made by others with stronger personalities; rather they must be made personally and intentionally. At times he reveals conscious decisions he made in his career that changed its course and, in some cases, his life. Those kinds of decisions define what others know about you, as you live them out, and as others recognize and come to trust you consistently to be that person. At times, bullies and corporate politics come on the scene, and Stewart consistently stands up for the customer, dealing with bloated corporate bureaucracies that interfere with the organization’s focus on the customer.

In Part 2, The Lessons, Stewart briefs his readers as though he’s leading a conference on the success factors of the business world. Chapters titled The Management Punch List, The Stewart Theory of Change Management, Mentoring the Next Generation, and Losing Your Job are among those that wrap the lessons-learned of Part 1 into a Management Philosophy that was successful for Stewart.

“Money is earned at the pointy end of the stick, where company employees touch real customers.”

Wayne Stewart was successful at writing an engaging and interesting book on a life well-worked and well-lived. While the title says it’s a guide for early- and mid-career professionals, I would recommend it to all stages and levels of a career.

“Trying to achieve complete consensus can devolve into an endless pursuit of herding cats.”

Wayne Stewart is a native Texan and a graduate of the University of Texas. He began his professional career at Texas Instruments in 1973, rising through the managerial ranks to lead large Defense Operations. After 21 years, he moved to executive positions with FSI International and ADC Telecommunications, and following the Telecom meltdown of 2001, he went out on his own, opening consulting, franchising, and ranching businesses. In 2007, he was invited back to the corporate world where he finished his corporate career as an executive at Schneider Electric. After retiring in 2013, Wayne took up writing and ranching full-time, and he recently opened a publishing business to handle publication and distribution of his books and his consulting business as he’s asked to deliver the lessons of Mentoring Intentional Excellence in first person.